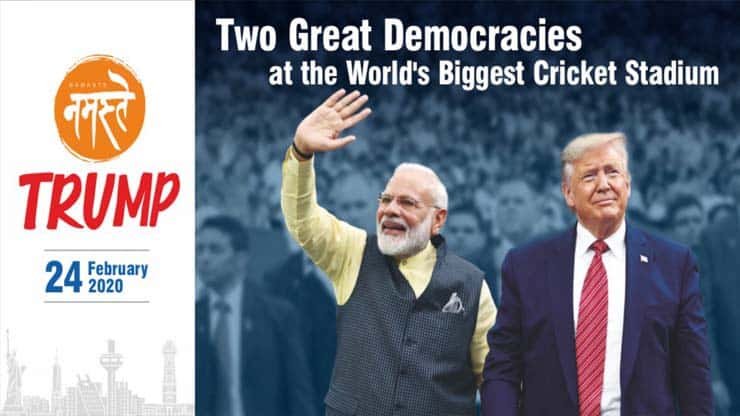 So the Indian Prime Minister Narendra Modi has requested to trump to inaugurate this stadium. And also Donal Trump and Narendra Modi will start their journey with the public rally, And the rally starts with Airport to the new Stadium(in Ahmedabad) with five to seven million people and this event name will be ‘Kem Cho Modi’.

What AMC is doing to decorate the City ahead of Donald Trump’s visit??

From resurfacing roads and planning palm trees the streets to building a wall to hide the slums, and all the routes between airports to Airport will be blocked by Government for a few hours on 24 Feb. However, AMC Commissioner Vijay told that ‘decision to build a wall to prevent encroachment on the road was taken two months back’ and not to do for U.S. President Donal Trump.

Is Inaugration is the main reason that Donald trump coming to India??

No, The main reason is the substance of the strategic partnership will be discussed in New Delhi. And also Trump’s visit is important in the context of maintaining the high-level contact between India and the US leadership said by Arun k. Singh who is a former Indian ambassador to the U.S.

For Trump himself, this will be an opportunity to show that he is getting a positive response internationally following his Senate impeachment acquittal and State of the Union address, which appealed to his voter base and was also marked by attempts at outreach to the African American and to the Hispanic community in the US.

So that’s why Motera will be overtaken by seating capacity and it’s considered as the world’s largest cricket stadium. Along with there are some other facilities also have in this ground as compared to others.

When will the First match play in World’s largest Stadium?

Officially it not decided yet, but the news coming from source is that “On March before IPL-2020 start there will be T20 matches between World’s XI vs Asia’s XI for only just for opening
the cricket game”.

This article is written by Aman Agrawal

1 thought on “Why Donald Trump is coming to Ahmedabad city? (Main Reason’s)”